“I actually feel pretty good about that evolution of myself because it means to me that I do feel a greater sense of belonging, not just in myself in this world but also in my communities—in the running community, in the sports community. I’ve wanted for so long to be seen for the athlete and the person that I am and not just the trans athlete and not just any one thing. I want to be able to show up in the wholeness of who I am and be celebrated for all of it and I’ve felt a little closer to that in recent years. And although it’s kind of slipping away, maybe I’ll just have the most audacious season in 2023 with all this legislative anger, but it just feels different now, which is awesome because that’s the goal and the hope for anybody, I think, is to continue to grow and evolve.”

This week’s episode is with Chris Mosier. Chris is an incredible athlete: He’s a hall of fame triathlete, an All-American duathlete, a 6-time member of Team USA, and a two-time national champion and Olympic Trials qualifier in race walking. He’s also a Nike-sponsored athlete who, in 2015, became the first known transgender man to represent the United States in international competition. Beyond all of that, however, Chris is an incredible person who knows himself better than nearly anyone I’ve ever met and he’s an advocate, inspiration, mentor, and a role model to so many, myself included.

In this wide-ranging conversation, Chris and I talked about his relationship to sport and how that’s evolved throughout his life. We discussed identity and how he shows up in the different communities that he belongs to, as well as why he doesn’t want to be seen in any one particular type of way. Chris told me about navigating the world now as a white male and how that perspective differs from what he experienced earlier in his life, how we can all be allies and advocates for equal rights in sports and society, and so, so much more.

— New Balance. The new FuelCell Rebel v3 from New Balance is everything I enjoyed about its predecessor but with a more supportive upper, a little more cushion underfoot, and a more durable outsole. What it doesn’t have is much more weight, checking in at under 8 ounces, making it a great go-fast shoe for tempo runs, track workouts, and interval sessions on the road. The FuelCell Rebel v3 is available in both men’s and women’s sizes on newbalance.com or at your favorite run specialty retail store.

— ARENA. If you don’t have time or want to go to the gym, ARENA is a serious and super efficient strength training solution. Their product, which is a stealthy-looking metal plyobox with a cable-based resistance system, replaces a whole kit of free weights and bands. I’ve been using my ARENA unit for a few weeks now and I don’t have to think about it: I just find the workout I want to do on the app and it counts my reps, remembers my weight, and guides me through the workout. Try out an ARENA today by going to arena.fit and seeing if there is a unit you can demo near you or you can sign up for a virtual demo to see how much of a game changer this is!

Music and editing for this episode of the morning shakeout podcast by John Summerford. Episode cover photo of Chris Mosier by Jaime Kelter for the NY Times used with permission. 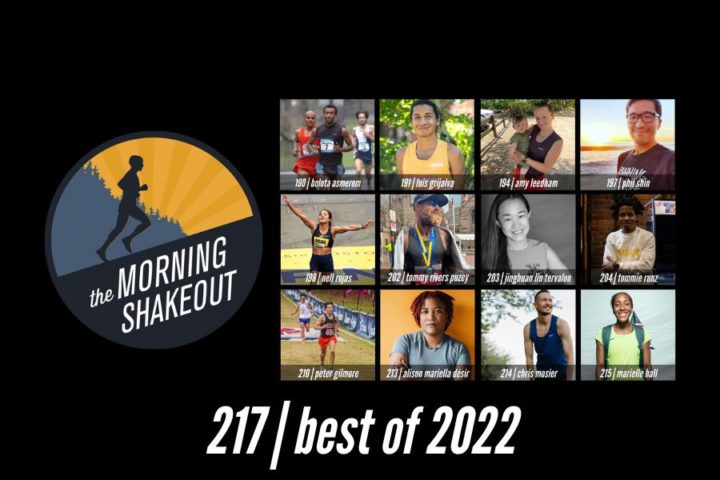