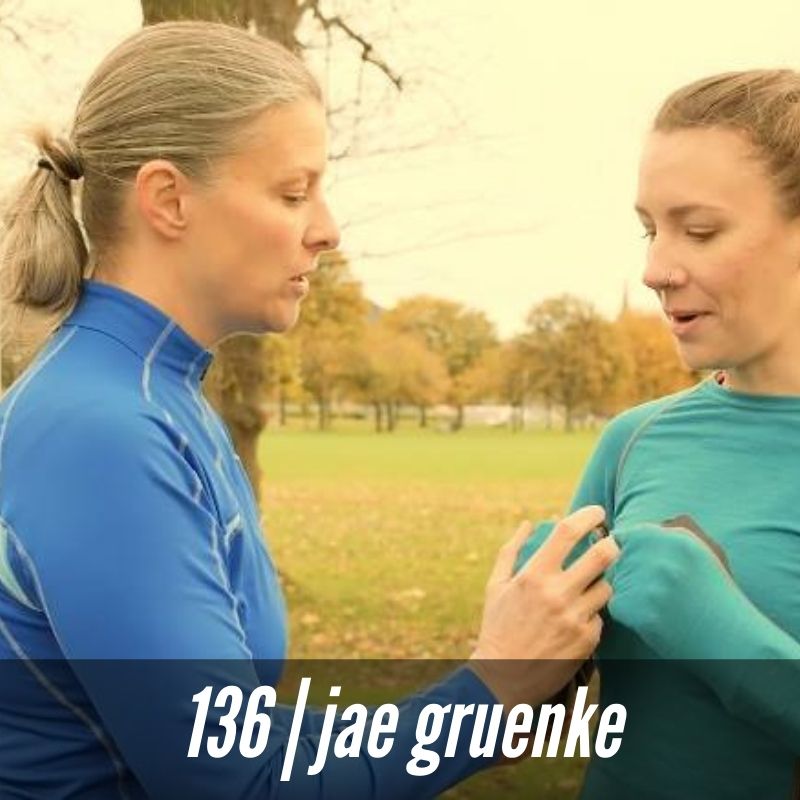 “What I love about running, and what I love even more about running than I ever loved about dancing, is how human it is. It’s a fundamental human gait: We crawl, we walk, we run, technically, apparently, skipping is also another gait, and so when you get better at it, for myself, I just felt more human. At that point in my life already, I had been through so many movement methods in trying to get myself together as a dancer: so much yoga, Klein technique, Gyrotonics, Alexander, Trager, everything that was out there I had done, practically, that I could find, and that was a lot. It all had effects, gave me different sensations. There’s a certain way that I feel after I do yoga, but after I run, I realize I feel more human, as in a member of my species—it’s really pronounced, really profound—and I really love working with that more than anything else.”

Jae Gruenke is a highly sought-after expert on running form and technique. She’s also a Feldenkrais Practitioner, founder of The Balanced Runner, and has helped countless runners from beginners to Olympians improve their form and performance since 2003.

I’ve been following Jae’s work for a little while now and recently found out that she doesn’t live far from me, so we sat down at a local park and had a conversation that I think you’ll really enjoy and take a lot away from. We talked about what it is that Jae does exactly and how she uses the Feldenkrais Method of Movement Education to help runners with their technique. She told me how she got into running after years as a professional dancer and how solving her own problems led her to working with others who were navigating similar issues. We discussed what mainstream publications miss when it comes to running technique, common places where runners go wrong, and what she considers to be the six elements of good form. We also got into cadence, the influence of footwear, the analyses she does on the elite fields in major races, and a lot more.

— Gatorade Endurance: I’ve been using Gatorade’s Endurance Formula before and during some of my workouts recently to ensure that I’m adequately energized and hydrated, and, so far, so good. I LOVE the Watermelon flavor and it’s also available in Lemon-Lime, Orange, and Cherry. Check out and try some of Gatorade Endurance’s different options for yourself this off-season. Use the code “Shakeout20” and get 20% off your purchase at gatoradeendurance.com.

— InsideTracker: InsideTracker is the ultra-personalized nutrition platform that analyzes your blood and DNA biomarkers along with your lifestyle habits to help you optimize your body and reach your goals. As we head into the holiday season, take advantage of InsideTracker’s BEST DEAL of the year and take control of your health and wellness by using the code GIFTFROMMORNSHAKEOUT at insidetracker.com to save $200 on the Ultimate Plan, their most comprehensive package.