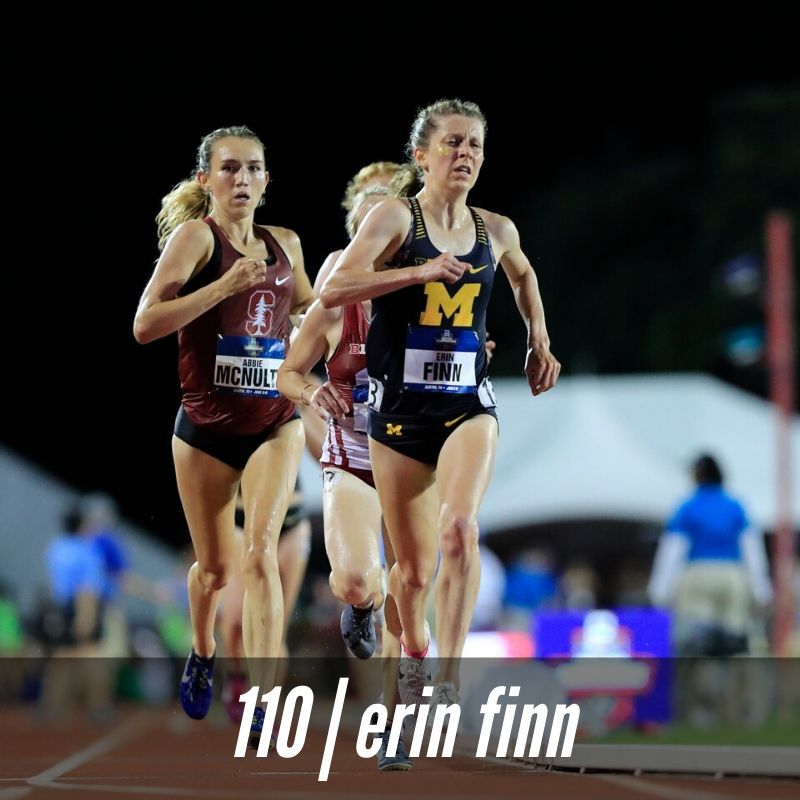 “Just having a group of people who accepted me unconditionally, who I knew had also been through hard times, who would be there for me, getting connected through a community group every week and making church a priority and just having these things outside of running just were so, so, so vital in giving me an identity and giving me a community and helping me feel like I was part of something bigger than myself. So yeah, it definitely definitely played a huge role in helping me feel less alone—through injury and then through other hard things.”

Erin Finn is the real deal: She was a 10x All-American at the University of Michigan and a 4x runner-up at the NCAA Championships. She holds four school records for the Wolverines and has personal bests of 15:23 for 5000m and 31:51 for 10,000m. But those numbers don’t even begin to tell her story.

Now in her mid-20s, Erin is a first-year medical student at the University of Michigan. She’s still running, putting in 80 miles a week around her studies and other commitments, and she has her eye on moving up to the marathon in the next couple years.

We recently had a great conversation talking about her relationship to the sport and how it’s evolved since she first got started as a young kid. Erin told me why she’s inspired by people who go about running differently—and along those lines, why she chose med school over pursuing a professional running career. We talked about her tendency toward perfectionism and how it can be both a blessing and a curse, getting caught in a cycle of overtraining and under-eating toward the end of her collegiate career and how she pulled herself out of it, where her competitive streak comes from and why she actively has to try and suppress it, the importance of family, faith, and community in her life, and a lot more.

This episode is brought to you by: UCAN. I’ve been using UCAN’s Performance Energy drink mix before my long runs, big workouts and races for the past four years, and it’s a crucial part of my nutrition plan, providing steady energy that’s easy on my gut. Go to ucan.co/shakeout — that’s ucan.co/shakeout — to learn more about UCAN’s one of a kind energy and use code  SHAKEOUT25 to save 25% off your first order. If you’re already a UCAN fan, you can save 15% with code SHAKEOUT.